Dr. Finn Ole Nielsen
Studied and obtained his B.A. and Mag. Art. in Prehistoric Archaeology at the University of Copenhagen 1984. 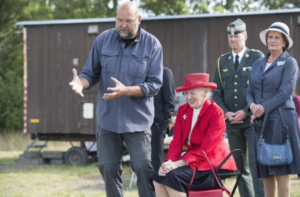 Prior to his permanent employment at the Museum of Bornholm, he worked in several museums and carried out research on Bornholm’s Early Stone Age from 1986-89 and 1994-95 with funds from Carlsberg Foundation and the State Humanities Research Council. He has also been excavation leader for the National Museum and Museum of Bornholm; He has worked for the Forest and Nature Agency, has done consultancy work for the Bornholm County Technical Management and he is currently archaeologist and museum inspector of the Bornholm Museum (since 1998).
He is member of the board of Bornholm’s Historical Society 1996-2001; member of the board of Bornholm medieval centre 1996-2004; Chairman of the Regional Cultural Environment Council 1998-2003.He has written: Bornholm archaeology (Urban Archaeological Studies) (specialization, 1983).

At Universidad Autónoma de San Luis Potosí, Mexico (UASLP), Dr. Nicolás Caretta was its founding member of the Archaeology program, a core faculty member of postgrad of the Faculty of Social Science and Humanities (FCSyH) and PMPCA. He was the first of the head of the archaeology department.

He has been a guest professor of the Amerindian Studies in the University of Barcelona, Spain, and the Iberoamerican Institute in Berlin, Germany. He was member of the Sistema Nacional de Investigadores-Conacyt (National Council of Science and Technology, Mexico). He has been Chairman of the Award for Excellence in Latin American and Caribbean Archaeology Committee, Society for American Archaeology (2012-2014) and the Southwest Symposium- Chairman 2014-2016. He is currently member of the committee of Americae– European Journal of American Archaeology, among others.

He has been the principal researcher or associated researcher on numerous grants funded by SEP, INAH, CONACyT, and awards from external sources, including NSF (co-PI with Arizona State University), Deutscher Akademischer Austauschdients (co-PI at DAAD Germany), among others. Currently, the Bornholm Museum and its partner institutions (University of Gdansk, University of Århus and University of Lund) have been selected for funding by the Interregional South Baltic/ European Union to their project: ArchaeoBalt – Laying fixed foundations for innovative Archeotourism – a new “green” Archaeoroute in the Southern Baltic Sea Region with a €2.1 million for a 3-year project.

His areas of interest and publications are about Archaeology of Northwestern Mexico, Environmental studies, Hunter and gather societies, Fauna, Cosmovision, Rock art and New Technologies. He has also collaborated as adviser for the BBC-Natural History Unit. He is currently a researcher and responsible for the International Office at the Bornholm Archaeological Research Center of the Bornholm Museum in Denmark. 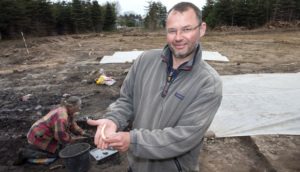 He is a graduate student from the Department of Archaeology and Ethnology at the University of Copenhagen.

From 1989 to 2002 he worked as employee at the Department of Information (OMA) in the National Museum and the National Museum School Service. During this time, he carried out teaching and lecturing activity in all periods of ancient history of Denmark. This dissemination activity has focused on school classes, universities, companies and other visitors. He arranged and participated in teacher courses inside and outside the National Museum and also produced teaching materials. He also prepared a number of teaching and dissemination projects. In addition, he had various tasks in connected to fundraising and registration at the museum.

In 1996, he participated in the planning and execution of the “Archaeology School”, a teaching and excavation project involving schoolchildren, which took place on excavations funded by the Copenhagen County Museum Council.

From 2003 to the present he works as archaeologist at the Museum of Bornholm in Rønne, where he is in charge of major archaeological excavations and research.

Michael Thorsen has a broad experience in teaching at Folkeuniversitetet, Copenhagen from 1989-2002, and from 2003, he has also been teaching students from the universities of Copenhagen, Aarhus, Trondheim, Warsaw and Gdansk.

From 2009 in collaboration with former museum inspector, mag.art. O. Faber and cand. phil. K. Fabricius he is processing materials from O. Faber’s Neolithic excavations. The title of the project is “Engedal – Lånum. Mellemneolitiske grave og kultanlæg I Nord- og Vestjylland, deres brug og samspil” (Engedal – Lånum. Middle Neolithic graves and cultic buildings in North and West Jutland, their use and interaction). The monograph will be published by “Det kongelige Nordiske Oldskriftselskab” in its monographed “Nordiske Fortidsminder”. The work is under preparation.

In 2011 he planned, executed and designed the permanent archaeological activity room at Bornholms Museum. Some ideas were further development of an exhibition in 1994 at the Nationalmuseum, Copenhagen he made in cooperation with the Kit Fabricius.

From 2012 an ongoing project for the systematization of finds from old and new excavations at Lilleborg and Gamleborg has being taking place. The end goal is to make the material easier accessible for scientists and for the public.

In 2016-2018 he has a pilot project for testing of known and new techniques for documentation of rock carvings. The project is financially supported by “Dronning Margrethe II’s Arkæologiske Fond” (Queen Margrethe II’s Archaeological Fund). 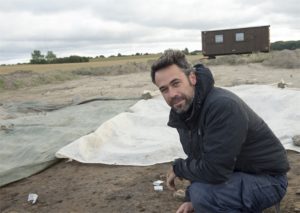 Prior to studying archaeology, Nicolas Braun was educated and worked (2001-2005) as a historical carpenter at the largest open-air museum in Denmark, Frilandsmuseet, part of the National Museum of Denmark. He has also wide experience in historical building technics and craftsmanship.

From 2005-2010, he worked as a carpenter and craftsman at the Medieval Center of Bornholm, explaining to visitors medieval building technics as well as guiding historical tours at the center and other places in the island. In 2016, he completed his studies in archaeology at the University of Copenhagen, and from 2011 to 2017 he has been working on several excavations on Bornholm, alongside with his studies. In 2013, he took part in a two months excavation in Benin (West Africa) as a part of the crew directed by professor Klavs Randsborg. During 2014, he led the construction of a mini-museum about prehistory and archaeology of Benin at the UNESCO site, in the Royal Palaces of Abomey.

Currently, he has been leading the development of the exhibitions for the new Bornholm Museum Center, a work that will continue until the opening of the new museum. 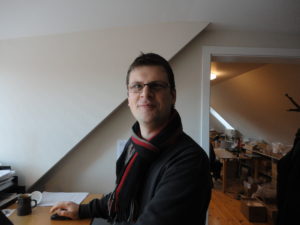 He has been working for the museum since 2008 in charge of the register of the archaeological collections. He is also responsible for the processing of metal objects recovered by the amateur metal detector association. 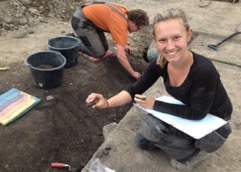 A graduate student from the Department of Prehistoric Archaeology at the University of Aarhus, where she studied from 2013 to 2016.

In 2016 she graduated with a BA focusing upon the Rock Carvings on Bornholm and in Southern Scandinavia as well as the importance of their preservation. The main focus was the traditional registrations methods against the newer digital methods as well as which methods were the most professional and careful way to preserve the prehistoric art.

From 2016-2018 she continued with her master in the same department of Prehistoric Archaeology, but this time she focused on the Stone Age and the transition from hunter to farmer on Bornholm compared to the rest of Southern Scandinavia .

2014-2018: Through her studies, she has was part of the Bornholm’s Museum excavations during summer vacations. These excavations included Vasagaard West and East, Nørre Sandegaard, Skovsholm as well as other smaller excavations. Areas of interest are Bronze Age and Late Stone Age, but since her master degree she has been focusing on the transition from the last hunter/gatherers in the Ertebølle Culture to the first farmers in the Funnel-beaker Culture as well as others parts of the early Neolithic.

Autumn/Winter 2018: she had an internship at Moesgaard Museum after she graduated, where she assisted the IT-department with digitalizing and georeferencing. The work included working with GIS-programs, focusing on digitalizing maps of Denmark from 1800 in order to use them at future excavations.

Currently she has been an intern at Bornholms Museum, where she was working with material from the Sorte Muld site from the Germanic Iron Age. The work includes sorting and registration of newly found material.

She has been a part of the staff working with projects at Vasagård and Sorte Muld from the ArchaeoBalt and the Institute for Field Research.