The purpose of the project is to investigate the conditions for using our common cultural heritage of the Baltic Sea area, in the form of sacred places in the landscape, for developing tourism and for strengthening our cultural identity.

More about the project

This project is designed to meet and draw benefits from the currently increasing interest and demand for spiritual tourism, which is a part of wellbeing tourism and in the case of this project also of archaeological tourism, as well as the need to connect with the landscape and heritage.

Good practice cases as communicated by EUSBSR (2019) shows that there is an “absence of significant natural sites in the region that focus on promoting the cultural heritage of the region to attract tourists”. The seed funding will be used to make a prefeasibility study of a full project including assessment of available sacred sites in the landscape and the communication of them for tourism, and make necessary preparations, including identification of key actors, establishment of a proper partnership, and creating a shared vision for a 3 year project.

The ArchaeoBalt project aims to present new ways of highlighting forgotten cultural and material cultural heritage through a variety of activities. These are intended to increase the exchange of tourists between the partner sites in Gdansk (Poland), Bornholm (Denmark) and Lund (Sweden) in the southern parts of the Baltic Sea (Southern Baltic Sea Region). At the same time, new forms of sustainable green and blue archaeotourism are being developed. The project is supported by “Interreg South Baltic”, European Interregional Development Fund. 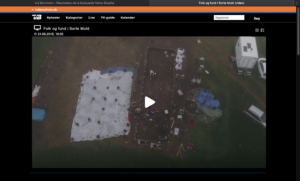 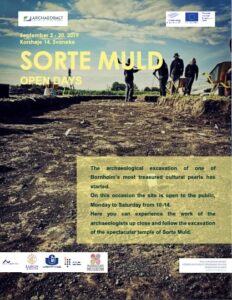 The Bornholms Museum and the University of Gdansk will carry out a second season of archaeological excavation at Sorte Muld site. Visitors are welcomed during programed Open Days.

There are very few excavation projects with the aim of investigating Neolithic settlement sites. This is not due to their scarcity as Neolithic settlements are among the most frequent traces of prehistoric habitation. Despite this, they are often mentioned simply as postscripts when the result of a dig, a barrow for example or an Iron age settlement, is reported. The knowledge that until a few years ago Neolithic settlements were a question of occupation layers and refuse pits explain this disinterest. However, the discovery of Runegård Øst 4, Nrd. Grødbygård and Limensgård (settlements) and Vasagård (causewayed enclosure) stirred an interest with regard to settlement sites and how to interpret them, as well as in investigations of the settlement pattern of which they were a part. In recent years, new information has also come to light, and this has injected enthusiasm into the efforts to cope with the difficult task of gaining a better understanding of Stone Age farmers. At the same time, it may help to solve the different problems posed by Neolithic settlements. From the view point of a rescue operation, it is high time to begin the requisite activities for most of the settlements lie in arable land and are just as threatened as— in fact, far more visible—barrows and megalithic tombs. 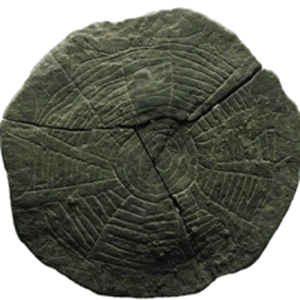 On the island of Bornholm, the highest research priority of all has been given to habitation/activity areas, causewayed enclosures, palisades and the circular structures (nine have been found—seven on the East and two in the West site—but there are certainly more). From the top layer of the causewayed enclosures, 300 broken and complete flat stones were recovered, engraved with patterns of radiating straight lines now called sun stones. But some other areas must be explored.

For most phases of the Neolithic sites in Bornholm, we still have little knowledge of how causewayed enclosures, palisades, habitation, activity areas and the presence of circular structures (timber post marks in a circular form) developed. Something as basic as the identification of houses/activity areas and circular structures still cause great difficulty. It seems to suggest that the missing evidence will not emerge of its own accord, but that more systematical investigations are called for.

Ideally, the background material recorded information ought to be enough to give some idea of settlement in a given area—a settlement model. Several museums are at present engaged in the drawing up of periodical surveys of settlement that make it possible to take mapped finds as a point of departure. Neolithic settlement sites are, besides, not among the most difficult to trace as scatterings of flints disclose them, and they can very often be dated by finds in the topsoil. The nature of the soil is an important factor when identifying and interpreting traces of activity areas. Neolithic post-holes—if any—are often only faintly discernible and difficult to excavate if the soil is too sandy. The time of the year also plays a part. In dry summer months, both clay and sand are unfit for the horizontal excavation of larger areas.

Only rarely is it possible to assess the potential of a site solely by surface reconnaissance; test trenches or a sq.m. grid must be made. It will then be discovered that at no settlement site are there optimum conditions for investigating all aspects of a settlement and that it is a matter of choosing the method of excavation best suited to the site.

The comprehensive recording and mapping material already collected is being worked upon simultaneously with current fieldwork findings. The preparation of local chronology, based on C-14 dating, is also under way, considering that Bornholm has to some degree undergone a different course of development than the rest of Denmark. During the running of this project, another investigation program was completed in south Scania (within the framework of the so-called Ystad project) where, as in Bornholm, a number of Neolithic settlement sites were excavated. Establishing contact with Swedish archaeologists working with the same problems in an area closely related to Bornholm has been important. 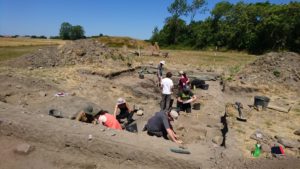 The main objectives of the Vasagård excavations for the coming season are the following: to pursue the search for information of one of the causewayed enclosures and the circular structures within the site, where we know now conditions seem especially promising. Right from the initial stages of the project, it was understood that conditions for the preservation of organic material were poor throughout most of the island. Therefore, expectations of being able to shed light on the natural environment and agricultural occupations were not high. Yet, certain possibilities began to emerge even in this field. One of the results of the ongoing digs at the settlements was a special find, an assemblage of seeds and ceramic in Bornholm that corresponds to the Funnel Beaker Culture in the rest of Denmark, and also overlaps in time with part of the Pitted Ware Culture and the Early Battle Axe Culture that, in turn, corresponds to the Middle Neolithic A V and Middle Neolithic B I. Similar material was also found in south and south-east Scania. Finds from a particular period are known to come from the settlements of Runegård Øst 4, Nrd. Grødbygård and Limensgård. The Neolithic dwellings at Vasagård and cultural layers fall into two periods, i.e., Early Neolithic B/C to Late Funnel Beaker culture and Middle Neolithic A V to Middle Neolithic B I.

Part of the ongoing excavation in the causewayed enclosures and the later palisade structures led us to the discovery of timber circles (10; with each having a diameter of 6 to 9 m ), adding a new dimension to our research as they would not only help in understanding their use but also figure activity areas at Vasagård. The circular features were dated by objects and C14 to the Late Funnel Beaker culture. Burned knives, axes, pots and seeds were placed with a particular purpose in post-holes as offerings, clearly distinguishing them from the houses. Therefore, our thought led to consider that the timber circles were consecrated by means of offerings. These small but important relics of the past culture and habitat are the result of riddling cultural layers, pit fills, and soil from post-holes, and now a strict, routine of excavations will continue in our field season when we excavate the Cultural Layer II (3000 BC). The same applies to the collection of soil samples for different studies.

For information about our field school check:

ArcheoBalt is a 3-year long project binding Polish, Danish & Swedish Universities and Museums that pursues to present a new way to promote forgotten cultural and material heritage through several activities, which should boost the tourist exchange in SBSR by creating a new brand – sustainable green & blue Archeotourism. In order to ensure its success, the ArchaeoBalt will establish a 3-year plan, take account of factors such as the development of ideas regarding the project. The project aims to create a protocol that will help in the development of an archaeoroute, that will integrate the existing ideas and routes to the new proposals based on archaeotourism, increasing and improving the routes and offers, and presenting a well- developed touristic offer that will outlive the project lifespan.

The project considers as well, the creation of common tools for the SBSR region: Virtual Museum of SBSR Website along with a tourist planner, Virtual Reality games, board games, novels and conferences, archaeological open to public and open house activities in each participating countries and branded festivals, where historical re-constructors will have the possibility to sell their merchandise. All these elements will coin the future offer of participating institutions throughout the year. Archeobalt will be held in Poland [Gdańsk – Wisłoujście Fortress], Denmark [Bornholm – 3 remote locations] and Sweden [Lund – Uppaakra] as part of the pilot project.

Our activities will have great social impact since it will cooperate from the beginning with the different levels of government and society in the decision-making processes of the project, for the design and execution of strategies for the archaeoroute as element of conservation of knowledge of the regional heritage, memory and identity. Archaeobalt will seek to perform within this frame of social joint responsibility and improve in infrastructure and resources according to the project, as well as to, increase the number of highly qualified personnel with sense of duty to help the creation of a green and blue proposal for tourism in an opportune and efficient way.

The final results should guide the Archaeobalt for years to come after the projects is finished and its actions should be considered with a view perspective to the future formulated in the following terms: The Archaeobalt should be recognized as a Program leader in Green and Blue Archaeotourism where cultural and educational experiences are reference for its managerial model. It will play an active role in the in the development of new projects and in specialized training for the benefit of the Baltic Region Archaeology and the creative economy of the South Baltic Region. 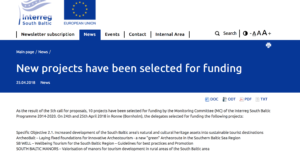