The Island of Bornholm is widely known for its natural beauty. Bornholm is also known as the Green Island and has an extraordinary rich Cultural Archaeological and Historical Heritage that spans the entire spectrum of Danish history from the remote Stone Age to the present. However, due to protection and conservation the number of sites exposed to public are limited. Some places are open to public visit during excavations and exhibitions are promoted as well as Open Day activities. There are sites which are permanent open to visitors among them: Hammerhus, Madsebakke and Ringeborg. 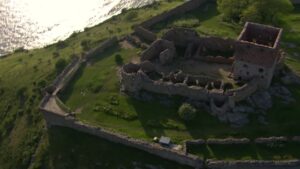 Hammershus  is a medieval era fortification at Hammeren on the northern tip of the Danish island of Bornholm. The fortress was partially demolished around 1750 and is now a ruin. It was partially restored around 1900.

During a number of successive struggles between the kings of Denmark versus the Archbishopric, the fortress served as a refuge for the Archbishops including Bishop Jens Grand. It was conquered by the king’s army on a number of occasions, e.g. 1259, 1265, 1319, and 1325. In 1521, it was taken by king Christian II, who used it to imprison Bishop Jens Andersen Beldenak of Funen. The fortress was conquered by forces of Lübeck the same year.

In 1658, Hammershus was occupied by Swedish forces, but a rebellion on the island terminated the Swedish rule. The rebels, led by Jens Pedersen Kofoed, shot the Swedish commandant Johan Printzenskiöld, and the Danish peasants traveled to Copenhagen to return the island to the king of Denmark. Corfitz Ulfeldt and his wife Leonora Christina were imprisoned in Hammershus 1660–1661. In 1743 Hammershus was abandoned as a stronghold. The remains were preserved in 1822. Since the major excavation and restoration work in the late 1800s, there has been a continuous maintenance of the ruins. The locals were allowed to claim stone from it for their own uses, until Hammershus was put on the National Historic register in 1882.

Madsebakke is a rocky slope between Sandvig and Allinge on Nordbornholm (Allinge). It is known for its extensive rock carvings from the Late Bronze Age (ca. 1100-500 BC). 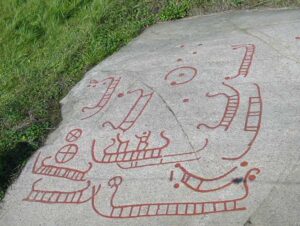 Madselykke petroglyph field is Denmark’s largest with fourteen ship carvings, five-wheel crosses, five-foot figures and many bowl signs. The foot figure points towards the sun at sunrise at summer solstice. Madsebakke has been considered a significant site in the Bronze Age.

The name Madsebakke is due to the fact that the hill in 1719 was owned by a man named Madtz. The rock carvings were discovered by Swedish stonemasons, who, however, found that the granite was of poor quality. That meant the pictures survived. Just 100 meters from Madsebakke, two other rocks were blown to pieces at the end of the 19th century by granite quarrying, although they too were filled with petroglyphs, including a human figure.

An area of ​​0.5 hectares at Storløkkebakken (Birkebjerg) was protected in 1930 to protect the rock carvings and to give the public access to the ancient monuments. In 1944, Madsebakke and the nearest area were protected to protect the rock carvings. In 1965, another area at Madsebakke was protected, so that the total protected area is 1.5 hectares. In 2006, DN filed a protection case for Madsebakke, but the protection case was initially rejected by the Conservation Board because it would be an expensive protection, as several landowners had already been allowed to subdivide holiday home plots. The Danish Society for Nature Conservation complained and in 2009 the Nature Complaints Board decided the case. They found that the petroglyphs are so important that one will pay for them to be preserved, and thus for the area to be preserved. [3] The decision was appealed, but the Nature and Environmental Appeals Board made a decision in the case on 8 September 2011 and 43 hectares were protected. The state and Bornholm’s Regional Municipality own the 27 hectares, while private individuals own the 16 hectares.

Rispebjerg is an archaeological site on the Danish island of Bornholm. Located 7 km west of Snogebæk on the road to Pedersker, it contains both the remains of a Neolithic sun temple and Iron Age earthworks. The construction is known only from quite a few localities in the Scandinavian area. Archaeologists refer to the pile-built sites as “woodhenge” based on similar circular sites found in the British Isles.

Archaeologically, the place really stood out on the map back in 1897, when the Brogård axes emerged from the meadow in Øleådalen west of Rispebjerg. The site was discovered in 1897, leading to finds near a spring of six flint axes and four flint chisels from the mid-Neolithic. A year later 13 flint axes and two chisels were found, making it one of the principal sites for finds of flint axes and chisels. The fact that the finds were made near a spring indicated that the site had religious significance.

The site comprises a number of ancient wooden circles from about 2,800 BC. Traces of the original wooden poles were excavated by archaeologists and later marked out with stumps of wood for visitors to observe. From the clay pieces, bur 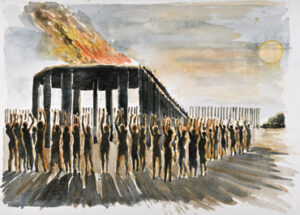 nt flint and burnt bones found on the site, it has been suggested that the circles may have served as a sun temple. They apparently supported a clay-covered platform, accessed by a staircase, on which experts believe fires could have been lit, possibly for religious events. 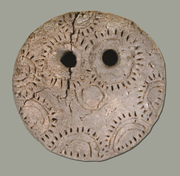 Clay disks with ancient sun symbols have also been found, ritually buried under the poles. It appears as if the wooden circles were constructed over three separate periods.

Another three identical woodhenges have been found in Vasagård, a site from the same period. This is probably a reminiscent of a pattern well known from other rituals of the Stone Age peasants. 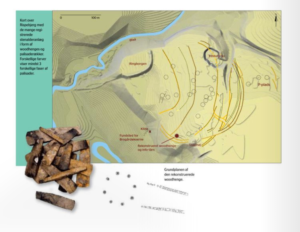 The fenced area originates from the Funnel Beaker Culture, 2900-2700 BC, where three stockades with palisade have followed each other and covered a massive area. The smallest stockade covers an area of 4 hectares, the youngest and largest stockade included about 6 hectares but it may have been twice as large. Both within and outside palisades there are signs of habitation, including houses and tools of both local and imported flint

Rispeberg also comprises Bornholms the largest Iron Age fortifications. The inner stronghold was well protected by 15-meter-high steep slopes leading down to the valley of Ølea stream and by 3-meter-high 120-meter-wide semicircular ramparts fronted by a 2-meter-deep fosse (dry moat). An outer earthwork wall and fosse, 200 meters to the south east provided additional fortifications and refuge during attacks.